I deviate (slightly) from my weekly Trump voter interview to talk with non-Biden voter, Justin Brady.

Before I tell you about that conversation, please help grow this alternative to shock-jock radio. LISTEN TO THIS WEEK’S PROGRAM AND SUBSCRIBE TO OUR PODCAST. We discuss the lawsuit against Iowa’s new voter suppression law with Joe Henry, Charles Goldman talks about union organizing at Amazon, and Donnielle Wanatee and Kathy Byrnes share news about a group of Native leaders heading to Washington, DC, with a plea to shut down oil and gas pipelines. 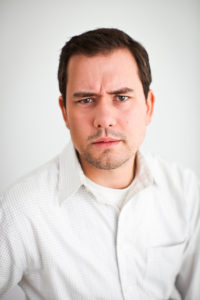 Most of my Trump voter conversations cover a lot of ground. With fellow podcaster and radio dude, Justin Brady, we focus on partisan politics. And I promise, Justin’s not at all as angry as he looks in that photo. (Really, Justin, you couldn’t have sent me a pic of you smiling while playing with a cute kitten?)

ED: Most Libertarians I talk with voted for Donald Trump. But not you. Why not?

JUSTIN: Back when Obama ran, I was having a conversation with some people and said, “Hey, if everyone in the country would just vote for the best person for the job regardless of party, we wouldn’t be in this stupid mess where we’re always putting up the two worst people in the country and then voting to keep the other out.” Then someone said, “And how often have you done that?”

JUSTIN: I just stared at them, my jaw hit the floor, and ever since that day I’ve voted for the best person for the job.

ED: Ok, but how do you argue against people who say, “Nice idea, but our system marginalizes anyone who doesn’t vote for one of the two major party candidates.”

JUSTIN: I wish we could get away from fear-based voting and vote FOR candidates again.

ED: Me too, but it’s going to take solid systemic changes for third parties to become viable. Let me ask you about your short stint as a talk-show host on WHO Radio. First, why was it short?

JUSTIN: Most popular radio is right-wing people raging against how Democrats are the problem, and they’ve ruined the country. That’s not me. I don’t believe that. I wanted to do data-driven opinion. I’m not just going to rant and take callers. We dramatically increased ratings. There is this hunger for respectful debate and data-driven opinion, and talk radio does not need to be far-right people.

ED: The problem is that the public airwaves are no longer truly the public airwaves. We’ve done away with the Fairness Doctrine, and the Telecommunications Act of 1996 allowed big corporations to own multiple stations in any market. As long as that continues, we’re never going to have balance.

JUSTIN: I don’t know a lot about it. Maybe I should. All I can talk to is daily programming in Iowa. Where you have WHO hosts leaning right, you also have Iowa Public Radio hosts who lean left.

ED: Was there any Democrat running for president in 2020 you could have supported had they won the nomination?

JUSTIN: I told Congressman Delaney that he was one of my top choices. Andrew Yang, I really liked him. But Yang’s universal basic income, I think would be a complete disaster for the economy. Also, I think Tulsi Gabbard has shown a history of being able to work with both sides. She seemed to have mutual respect except within her own party, and I’ve never understood that.

Watch our conversation with Kathy Byrnes and Donnielle Wanatee on The Fallon Forum Youtube Page.

Subscribe to the Fallon Forum on Stitcher, Apple Podcasts, or your preferred podcast platform. Check out our website and Facebook Page, and listen to the program on these and other local affiliates: