Iowans heard the lies over and over again during the fight against the Dakota Access Pipeline. Last week, once again, Big Oil couldn’t seem to tell the truth. The polar vortex had barely wrapped up its historic disruption of Texas’ power grid when the industry’s spin room revealed the culprit: Windmills!

That’s one of our topics on this week’s broadcast. LISTEN TO THE PODCAST HERE or catch the program on one of these RADIO STATIONS. We’re also joined by Dar-Lon Chang, who worked as an engineer at Exxon for 16 years before quitting to devote his time and talent to the climate emergency (read Dar-Lon’s story in this Inside Climate News article). Charles Goldman and I discuss the mess in Texas and the legacy of Rush Limbaugh, and Kathy Byrnes and I answer seasonal garden questions. 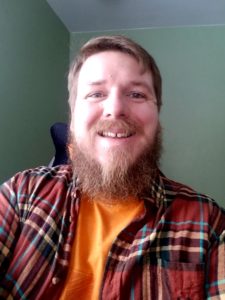 Continuing my effort to talk with Iowa Trump voters, we kick off the program with Joel Kurtinitis, a columnist and Trump voter from Dallas County. (Spoiler alert: We discuss the Muppets being cancelled, and Joel’s vote for one Iowa Democrat in 2018.) Following is a summary of our dialogue. I hope you’ll check out the full conversation here.

ED: Welcome to the program, Joel. Let’s cut to the chase: Did you support Trump in 2016?

JOEL: No, in 2016 I was a vocal Trump critic. I supported Ted Cruz in the Iowa Caucuses, and in the general election I voted third party.

ED: What brought you around to supporting Trump in 2020?

JOEL: Trump governed more conservatively than I thought he would. I don’t think he’s a true conservative; he just passed my expectations. I don’t like Trump, but the Democrats have lost their damn minds.

ED: How do you mean the Democrats have lost their minds?

JOEL: The Party’s rhetoric is all over the place and pretty much an embarrassment. The Kavanaugh hearing was a tipping point for me. The attacks mounted against Kavanaugh were at a whole new level. It seemed that Democrats in the US Senate would stop at nothing to try to destroy the man. The hashtag that came out of that was “believe all women.” That ignores due process, and that’s been a really scary switch to those of us on the Right. We see it as almost an existential threat from the Left.

Also, regarding the Democratic Party, it’s now politically incorrect to criticize things taught in diversity class, which is mostly a world-view teaching from the Left. Diversity class is not just about workplace harassment. It teaches ethics and morals. As a conservative, I don’t want my world view adjusted at work. There’s also the pressure of what’s socially acceptable, with identity politics now on full display. If you work at these places you’re expected to fall in line.

So, to sum up my reasons for supporting Trump in 2020, I viewed my vote as a defensive move, as a hedge, for example, against the chaos and violence we saw at some of the BLM actions. And about that, I’m all for police reform. Law enforcement has far too much discretionary power, and race is certainly a factor. But the Democrats hyper-focus on race misses all the other variables.

ED: Beyond political power, what’s your take on other epicenters of power: the media, academia, corporations?

JOEL:  They are all biased toward the Left.

ED: Aren’t they biased toward the status quo, not necessarily the Left?

JOEL: I’m not sure about that. I don’t know many companies that would vote against their own financial self interest, and when a company makes a decision, it’s based on what’s popular and what sells. And what sells now is woke Leftism.

ED: What resources do you use to fact-check questionable stories or data?

JOEL: I much prefer to go to the source than have a fact-check authority do it for me. From the eyes of someone on the Right, the message from the Left is, “Sit down and shut up; your views don’t belong in society any more.” Our right to have a viewpoint is being challenged, simply because of who we are. If you’re not a disenfranchised minority, you no longer have the right to an opinion. And there’s a mutual fear growing between the two sides of the political debate.

ED: How do you feel about news stories regarding some of Trump’s more controversial remarks, for example, mocking a disabled reporter, demeaning women, saying he supports waterboarding?

JOEL: I think he’s generally an idiot. All the reasons I opposed him in 2016 are still true.

ED: Do you feel the 2020 presidential election was stolen?

JOEL: No I don’t. Trump was off-kilter with all that.

ED: How do you feel about what happened at the US Capitol on January 6?

JOEL: Horrible. It was stupid and counterproductive. Most important, to the reasonable Right, it validated the fears of many on the Left that have been whipped up for years. What happened will be used to justify political retribution. Gun control will be one of them. The restrictions on gun owners are already troublingly arbitrary. Some of us on the Right look at January 6 as the American equivalent of the burning of the Reichstag before the Nazis took control — a high profile national event that provides the pretext for people to label the Right as terrorists. What some did on January 6 is criminal, and we should throw the book at them. But I don’t think adding the label of “terrorism” is helpful.

ED: What about Q-Anon and its role in the January 6 riot?

JOEL: There’s a desire to find a silver bullet, and that explains people’s attraction to such theories. There’s a degree of political mysticism going on. Same on the Left, but in that case, it’s about Trump. Get rid of him and everything will be fine. But it’s us that’s the problem, and us that need to be the solution.

ED: You mention protecting the Second Amendment. Aren’t mass shootings and gun violence a very real problem that could be addressed by some restrictions on gun ownership?

JOEL: Mass shootings represent only a tiny fraction of shootings. They’re tragic, but the reaction is undue. Defensive thinking on the Left and Right has led to a gigantic surge in gun sales. Mental health care, role models, and relationship building — even social media — have a part to play in gun violence.

ED: What else do you see as wrong with the Democratic Party?

JOEL: Its wholesale embrace of authoritarianism. There are authoritarians on the Right, and they’re making a comeback. But the force that wants to restrict the First Amendment and then the Second Amendment, that’s coming from the Left.

ED: Have you voted for any Democrats in the past?

JOEL: I voted for Rob Sand. Rob was willing to meet with me and honestly rationalize his positions. I find that to be pretty rare in this political climate.

ED: Were there any Democrats running for president in 2020 you could’ve voted for had they won the primary?

JOEL: I love Tulsi Gabbard. I think she’s great. I disagree with her on economic policy and the social safety net, but she’s reasonable and willing to show tolerance toward people of opposing views.

ED: Joel, thanks so much for joining us today.