As Native Americans ramp up their opposition to the Bakken Pipeline, Alexey Yaroshevsky with The Ed Schultz Show reported this story last week, which includes footage of Jane Kleeb and I on the last legs of the Iowa Pipeline Walk. Check it out here. 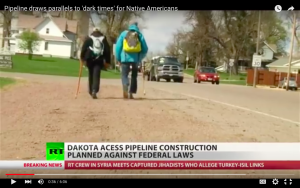 In what might go down in history as the “St. Francis moment” of the 2016 presidential campaign, a yellow finch settled on the podium during Bernie Sanders’ speech last week in Portland, Oregon. Sanders’ surprised reaction is sweet. But the audience response is an overwhelming outburst of unbridled joy! I have never seen a political moment quite so powerful and moving. Check it out here.

Sanders saw symbolism in the bird’s arrival (how could he not?). When he announced that the finch was “actually a dove, asking us for world peace,” the crowd went even wilder.

I’ve had my own experiences with birds whose activity seemed to portend an event of significance. When I lived with the Ojibwe in the 1980s, my Indian friends would frequently subscribe meaning to any unusual behavior of a passing bird — often with remarkable accuracy.

In the mid-1990s, I organized a series of marches and rallies with members of the United Steelworkers, who were on strike from Bridgestone-Firestone and in danger of losing their jobs because of weak worker-protection statutes. I had authored strike-breaker protection legislation, and was introducing Senator Harkin at a rally in support of the proposed law change. In the middle of Harkin’s speech, an eagle circled overhead. I nudged Harkin’s elbow, pointed out the eagle, and the Senator worked it into his remarks as a sign of the righteousness of the workers’ cause.

To credit birds with providing guidance to the course of human activities is a matter of personal opinion. But that birds are a deep source of inspiration is undeniable. And I suspect that, if birds could vote, we’d see an entirely different conversation this election.