In 1989, Mayumi Fukuda with the “Never Again Campaign” traveled from Japan to live with my family for six weeks. Our young children were intrigued by her accent, kimonos, paper cranes and the yogurt culture she brought with her from Japan and nurtured each day. 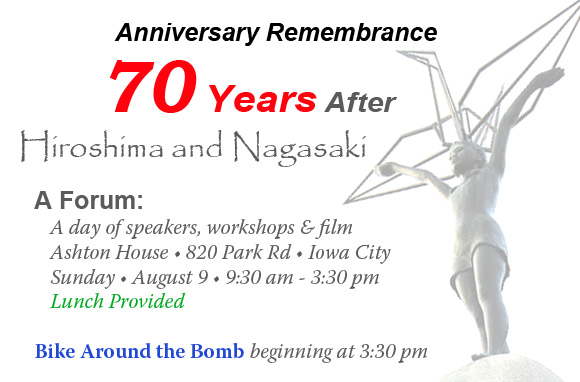 I organized dozens of opportunities for Mayumi to speak in schools, churches and with the media. She spoke about the horror of the atomic bombings of Hiroshima and Nagasaki – and the horror of the attack on Pearl Harbor. She spread the message that nuclear weapons and war itself must be abolished.

It was clear to me then, as it is now, that dropping atomic bombs on Hiroshima and Nagasaki was a humanitarian outrage – and strategically unnecessary. Given this history and as a life-long peace activist, perhaps it has surprised some of you to hear me call for a World War II-scale mobilization in response to the climate crisis.

Since last year’s Climate March, this call has been part of my message, part of how I have built bridges to broader audiences. This is not a statement on the comparative morality or immorality of World War II, but simply to challenge people to remember that, in response to a global crisis, America once retooled an entire economy – and did it fast! We can do that again, this time for peaceful purposes. We can refocus our efforts on strengthening our economy, retooling our energy grid, and adapting our infrastructure to withstand the coming changes, especially if we invest NOW the money that is being spent on upgrading and modernizing an arsenal that must never be used.

Most years over the past three decades, I have attended the annual August 6th Hiroshima Commemoration in Des Moines. This year’s event is called “Hiroshima/Nagasaki: 70 Years Later: The Fate of the Earth.” It’s at 7:30 p.m. at the Japanese Bell just east of the Iowa State Capitol.

And there’s an exceptional forum planned this year in Iowa City on August 9th (Nagasaki Day) from 9:30 a.m. – 3:30 p.m. It’s organized by Iowa Physicians for Social Responsibility and offers a day of workshops and speakers, including Paul Chappell and Steven Starr. It concludes with Global Zero’s annual “Bike Around the Bomb” event. Here’s the message shared with me by one of the Iowa City event’s key organizers, Dr. Maureen McCue:

“I know you care about the Earth, your children and grand children’s future. I know by now you’ve heard all the opportunistic strum, lies and fury regarding the Iran deal. But in all the hoopla, have you been thinking about the real elephant in the room, the global nuclear arsenal, especially the huge deadly U.S. arsenal? Have you been hearing or thinking about the global movement to get out from under the threat of over 17,000 of these doomsday weapons?

“If you are as concerned as I am (as are many, many millions around the world) about either an intentional or accidental use of these weapons, (for which we, the public, have paid and continue to pay trillions of dollars even as we cross our fingers that they’ll never be used), then please join us on August 9th to commemorate the 70th Anniversary of the only use of nuclear weapons. This is an auspicious occasion to begin to address current risks and opportunities to finally get out from under this cloud of doom. Nuclear weapons cannot solve any of today’s challenges, other than to exterminate all challenges! After 70 years of living under the threat of a nuclear exchange it’s time to say enough, time to seriously begin nuclear disarmament!

“The 70th Anniversary Forum, August 9th from 9:30-3:30 in the Ashton House, 820 Park St, Iowa City, will be followed immediately by a 7-mile, ‘Bike Around the Bomb.’  Please help me induce concerned and thoughtful members of the Iowa community to join us for this timely event.

“Help us bring citizens of the most powerful nuclear weapons’ nation on board with the rest of the world. You can register or donate on the PSR Iowa website:  <psriowa.org/events_70hiro.html>  Thank you.” – Dr. Maureen McCue

Thanks for reading and responding, and for all your efforts on behalf of our future! – Ed