Here’s the mug I use to drink my strong, black tea every morning. 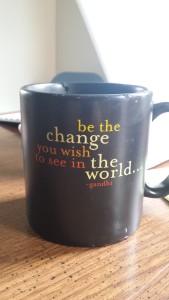 The quote by Gandhi does as much to jump-start my day’s work as the tea itself: “Be the change you wish to see in the world.”

(For what it’s worth, that mug also serves as the receptacle for my cheap, dry red wine. Just my rebellious, urban redneck nature, I guess.)

When it comes to the campaign to expose Exxon for flagrantly lying about climate change, we’ve arrived at “fight.” Last week, the fossil-fuel-financed fringe struck back, lobbing alarmist accusations at Big Environment (that’s me) for colluding with Big Attorneys General (like Iowa’s Tom Miller) to make Lil Ole Exxon look bad.

But it gets even better. Our campaign to shed light on what Exxon knew, when they knew it, and to what extent they lied about it is, apparently, not just a threat to Exxon but an existential blow to the very foundation of America’s liberty.

That bastion of independent journalism, The National Review, had this to say: “What’s at stake here is nothing less than the rule of law and the maintenance of a free society, one in which people, think tanks, and businesses are not subject to prosecution for political activism on contentious public-policy questions. This is an attack not only on the First Amendment but on the entirety of the political process itself.” (See article here.)

Like I said, this fight has begun in earnest, and Exxon’s well-financed defenders will stop at nothing to paint those of us taking on Exxon as evil and anti-American.

So, what can YOU do?

2. Thank Miller for his leadership taking on Big Tobacco years ago, and ask him to apply the same level of passion and diligence to holding Exxon accountable. Attorneys general in New York, California, Massachusetts and the Virgin Islands have launched investigations, and more are likely to follow. Here’s the main phone number for the Attorney General’s office: 515-281-5164. (Yes, I know phone calls are so last millennium. And simply because of that, the personal, nostalgic touch of a phone call is very effective.)

3. Learn more about the campaign to expose Exxon. Check out the work of Inside Climate News, the folks who were nominated for Pulitzer Prize for their research into what Exxon knew. Click here.

And if you need more motivation than the desire to rein-in climate change and hold a deceitful corporation accountable, just remember the Exxon Valdez, a tragedy that, 25 years later, Exxon has yet to pay for the long-term damage it did to Alaska’s environment. (See Climate Progress story here.)