Iowan pipeline fighters have come today to stand with the Lakota and other tribes in opposition to the Bakken Pipeline. We are from many groups, including Bold Iowa, the Bakken Resistance Coalition and the Meskwaki People. 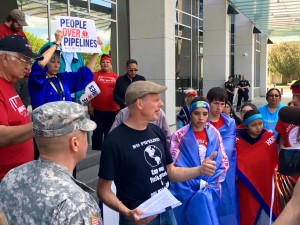 We represent farmers, landowners, tribes, environmentalists. Many of us have been in this fight for almost two years. In Iowa, we continue to stand strong against the Bakken Pipeline. And we honor the young men and women who have accomplished something great — this run of 500 miles.

Thirty years ago, I came here with another group of Iowans, to greet 600 people with the Great Peace March, who had walked all the way from Los Angeles, on their way to Washington, DC in defense of our Earth.

Two years ago, I came to Omaha from the other direction, on foot myself this time, walking from Los Angeles with 35 others on the Great March for Climate Action. We were hosted by Bold Nebraska, and I will never forget the incredible amount of work that Jane Kleeb, Mark Hefflinger, Anna Wishart and many others did to welcome us to Nebraska on our way to Washington, DC. I and the other climate marchers will always be grateful.

It seems that every time I come to Omaha it has something to do with walking or running. And it is truly a great honor to greet those who have made this journey of 500 miles, carrying the message that the Bakken Pipeline is not wanted in our land.

Last year, I walked 400 miles across Iowa following the route of the pipeline, and I got to meet the people who live and work directly in its path. I talked with hundreds of farmers, landowners and residents of nearby towns. Very few of them want this pipeline. Even most landowners who signed an easement don’t want this pipeline.

There was an older woman in Boone, who went on and on about how much she was against the pipeline, but then told me she had signed it because her lawyer told her to.

There was the woman in northwest Iowa, very much against it, but she saw the money from the pipeline company as the way to deal with her mounting medical expenses.

There was a farmer who walked with me across his land, dead set against the pipeline, but who was finally overwhelmed by how stressful it had become at his age to fight Dakota Access to the end.

Well, that SE Iowa farmer is still standing strong. And many others continue to stand strong. In Iowa, about 150 landowners refuse to sign away their land to Dakota Access. Nine landowners are part of a lawsuit that makes a very, very strong case that eminent domain cannot be used by a private, for-profit company.

In Iowa, we remain strong. Every week, there are multiple actions happening all across the state, including a vigil last week in Des Moines in support of the Standing Rock Sioux Tribe. And tomorrow, I will send a letter to President Obama signed by over 20 Iowa organizations, the same letter we delivered to the White House two weeks ago and signed by Jane Kleeb, Dallas Goldtooth, Frank James and me, a letter asking the President to tell the Corps to do its job.

Yes, we remain strong. But this great thing you have done, this run of 500 miles, makes us stronger. It inspires us to continue to fight the Bakken Pipeline in court, through pressure on the Corps of Engineers, through the media. And if it comes to it, through standing in front of the bulldozers when they come to tear up our land.

I assure you that hundreds of Iowans are willing to get arrested to stop this pipeline. Farmers who’ve never even had a speeding ticket tell me they’ll stand with us to block the bulldozers if it comes to that.

So, rest, tired runners. But only for a day or two. Because we need you. We need your strength, your vision, your keen minds. We need you to win.

And we win when we stand together.

We win when we are broad, diverse, and united.

We win when farmers, ranchers, tribes, city folk, environmentalists and climate activists work together, walk together, run together, and if necessary, get arrested together.

So again, thank you from the bottom of my heart for what you have done. Thanks to all who helped organize this run and this rally. And thank you for gifting me the honor of speaking here on behalf of Iowa’s thousands of pipeline fighters.