A coalition of 37 organizations just announced a major climate initiative, to be held a couple days prior to the Iowa Caucuses. Scheduled for Saturday, February 1 at 12:00 noon, the Climate Crisis Parade calls out the mainstream media for ignoring the urgency of the climate crisis. The launch was this past Tuesday through Facebook, and in less than two days, nearly 1,000 people signed on as Going or Interested! 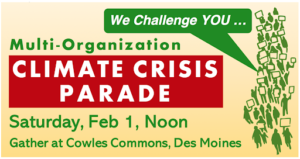 Here are three things you can do:

2. Sign-up to participate through Eventbrite and we’ll keep you posted with updates.

Please get it on your calendar and spread the word, because … 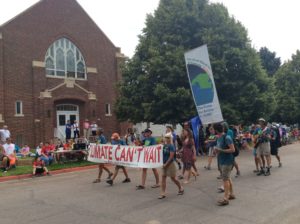 The Great March for Climate Action in the 2014 Independence Day parade in Culbertson, Nebraska.

What: We’ll gather at Cowles Commons, then “parade” to the Iowa Events Center where media from all over the world will assemble in advance of the Iowa Caucuses. We’ll have parade “floats” that call attention to one or more dimensions of the climate crisis, e.g., species extinction, the Dakota Access Pipeline, health impacts of climate change, impacts on minority and Indigenous communities, threats to our water and food supply.

Here’s how the coalition is describing and promoting the action:

“As individuals and organizations, we’re doing amazing work to raise awareness about the impending catastrophes that are guaranteed if we do nothing to combat climate change. Unfortunately, a large segment of America still has a blind spot about what’s happening. That includes the mainstream media, whose coverage of climate change during this presidential campaign has been totally insufficient to inform the American public about the urgency of the crisis.

“Because of the Iowa Caucuses, Iowans have a huge opportunity to influence the media and the public across the country. Most Democratic candidates have elevated climate in their agendas, which is great. The press, however, has remained largely silent.

“Des Moines will be swarming with national and international media during the days leading up to the Caucuses on February 3, giving Iowans a unique opportunity to take our message about the urgency of climate change to the media and the general public.”

As of today, 37 organizations have signed on! Here’s the complete list. Join us! — Ed