The election winners in the City of Boone last night were . . . wait for it . . . CHICKENS! Of all the surprising and encouraging election results in Iowa yesterday, what happened in Boone tops the list. To be clear, no chicken’s actual name appeared on the ballot. But the right to responsibly own backyard hens was a pivotal factor behind voters’ decision to elect three new council members. 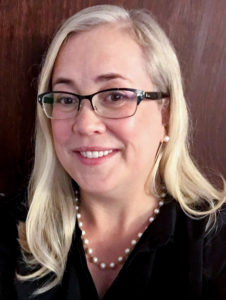 Yup. Chickens have yet to win the right to vote, yet they sure made a difference in Boone this week . . . chickens and the fact that voters are tired of ineffective government, poor management of tax dollars, and politicians ignoring the life-and-death issues affecting more and more of us.

April Burch is one of 40-50 Boone residents who keep backyard chickens. I’ve seen April’s coop. It’s immaculate, spacious, and if I ever end up homeless again, I want to live there.

“Our flock has been an absolute blessing for our children,” says April. “Our kids have been through a lot in their young lives and what they call ‘chicken therapy’ has really helped them flourish and feel grounded here.” 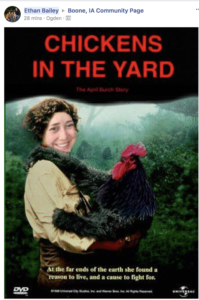 Meme circulated in Boone prior to yesterday’s election.

For chicken advocates, the pivotal moment happened when a Boone police officer circulated a meme based on Gorillas in the Mist. It showed a rooster in place of the gorilla, and April in place of Dian Fossey, who was killed standing up against corrupt government officials complicit in poaching gorillas.

“The meme was shocking and carried a very sinister and implicit threat,” says April. “It felt like the officer was trying to silence us, maybe to keep us from appearing in front of the city council that night.”

On October 16, the group was scheduled to attend the Boone City Council meeting in response to 650 Boone residents who had signed a petition in favor of allowing chickens. The pro-chicken group’s request was quickly rejected by council members. 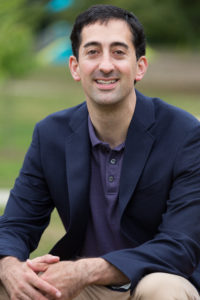 The dismissive way the pro-chicken people were treated combined with the threatening meme led April to one conclusion: “The way the councilmembers and mayor treated us wasn’t reflective of our town’s spirit. They looked down their noses at us and wouldn’t even consider a compromise. They were brash and mean, and the officer was even threatening. I’d had enough, so I recruited a friend, Dean Erickson, to run against the mayor on a write-in campaign.

Though his name wasn’t even on the ballot and the write-in campaign was announced less than three weeks before the election, Erickson received 25% of the vote. On a write-in campaign! That energy helped translate into victory for three other reform candidates.

Election results across Iowa were similarly positive. In Des Moines, renewable energy wizard Josh Mandelbaum won against a well-financed former city councilman. “Voters want someone to stand up for them in the ongoing water-quality debate. They want someone who’s going to create a more walkable, bikable city, too,” says Josh.

In Pleasant Hill, Ross Grooters squeaked out a victory for a council seat. I first met Ross during the Occupy Wall Street movement. Since then, he’s continued his unabashed efforts as a proponent of many progressive causes. 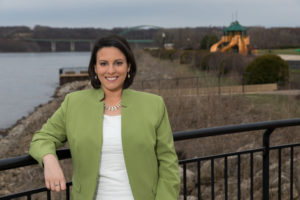 In Dubuque, Kate Larson ran to replace the only woman on the city council, Joyce Connors, who was retiring after 16 years. “This is a working class ward with a lot of diversity in race and incomes,” Kate told me. “I won because I’ve been standing up for issues people care about, especially during my four years on the Parks and Recreation Commission. We worked really hard to run a positive, people-powered campaign, and that’s why people turned out and were excited about it. Turnout was 18%, compared with 8% two years ago.”

I’m still trying to process all that happened last night. I’ve heard of upbeat election results in Ames, Iowa City and Muscatine. If you’ve got details on what transpired in your community, let me know.

Going forward, here’s a big question: What, if anything, do these results say about the 2018 General Election? Kate says, “Last night’s results reflect an awakening. Progressive candidates winning shows momentum that will definitely keep going through the midterms.”

Let’s not merely hope that happens, let’s make it happen. As April Burch showed in Boone, one person —  ok, one person and a handsome flock of chickens — can make a huge difference.