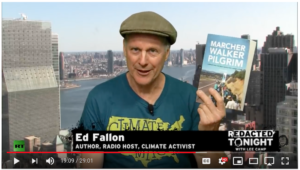 At the tail end of a presidential candidate event recently, I ran into an old friend, a woman I’ve known since we were in college together in the 1980s. I told her I was encouraged by the candidate’s strong stance on climate, but concerned that it wasn’t their top priority.

My friend responded, “Climate’s not my issue. It’s maybe ninth or tenth on my list. I don’t have kids and won’t even be alive in another ten years or so.”

I was shocked. How could an intelligent, progressive woman who is genuinely concerned about human welfare be so dismissive of future generations? The exchange reminded me that our challenge is not simply to get politicians and the media to wake up to the existential threat of climate change. Our challenge is also to wake up our friends, families and neighbors.

While Bold Iowa’s Climate Bird Dog campaign continues to produce solid results, it’s clearly time for a new level of agitation. The question I always ask when debating the merits of an edgy action is, “Will it bring new people into the cause or drive folks away?” In the past, I’ve tended to come down on the side of not wanting to alienate potential allies.

As Britain’s Extinction Rebellion ramps up its colorful campaign of creative nonviolence, moving from the streets of London to cities across the US, that’s the conversation attorney Channing Dutton and I kick around on this week’s Fallon Forum. Are shutting down roads and bridges, disrobing in front of politicians, blockading media conglomerates the kind of actions the climate movement needs? Does posing that question even matter any more? Is it time for an all-out assault on climate apathy? 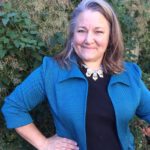 Later in the program, Sheila Knoploh-Odole joins me to discuss pushing city governments to address climate change, since state legislatures and the US Congress are mostly doing nothing, or in some cases digging the climate cavern even deeper. For those in Des Moines, on April 22 at 4:30, come to the Des Moines City Council’s meeting where the Energy and Water Use Benchmarking Ordinance will be discussed. 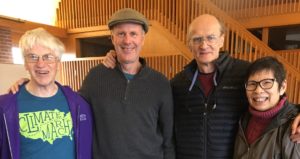 Also on the program, I talk about the recent book tour that took Kathy and me to five states for eleven presentations. We hated to burn so much carbon to fight climate change, but at least we were getting 50 MPH in Kathy’s Prius. It’s hard to measure the success of such a tour, but the following message I received from a young man in Pittsburgh was enough to declare the trek a success:

“I picked up a copy of Marcher, Walker, Pilgrim at your talk in Pittsburgh a little over a week ago, and I devoured it, and I’m totally floored. It’s wonderful that you wrote it, because it could inspire countless people to go many steps further than they currently do in the fight against climate change, and help them understand what that fight could look like. Also, fantastic writing. It’s filled with with deeply poetic and pointed passages. … Reading your book has inspired me to write about climate change and take larger strides in the fight against it.”

Tackling statues, protests, police violence, and conspiracy theories
On this week’s Fallon Forum, with co-host Charles Goldman:
(01:40) It’s now clear: Local law enforcement lacks a moral compass, is racially biased, and has been militarized by the feds, with Jennie Erwin;
(19:46) As offensive statues tumble, questions remain about what to do with them, with Civil War historian, Dr. Stephen Goldman;
(35:37) Conspiracy theorist defends premise that Marathon bombing, Sandy Hook massacre, and COVID-19 were hoaxes, with Jim Fetzer, organizer of the 2020 Question Everything Conference;
(52:03) Plan NOW for a fall garden, with Kathy Byrnes, founder and director of Birds & Bees Urban Farm.