I’m excited about this story in Iowa Capital Dispatch: Iowa sees surge in urban farming as pandemic continues. And while I’m recommending reading and viewing material for you this week, here’s the link to this week’s Fallon Forum podcast.

More on that. First, I need to follow up last week’s radio broadcast, podcast, and column. Whether you prefer to vote by mail, at the county auditor’s office, or at the polls, please:

WHATEVER IT TAKES — VOTE!

My column last week created some confusion, sorry. The title was Don’t Vote by Mail!, and if that’s as far as you got, you might have thought I was telling people either to vote at the polls or not at all. Going forward, I’ll try to be more diligent in my selection of titles, remembering that’s as far as some readers will get. 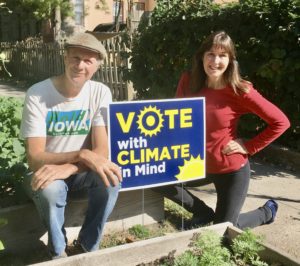 Beyond that, thanks to conversations with election officials last week, I’m now more confident that when Iowans cast their votes by mail or at the county auditor’s office, they will be counted. There’s still a risk of the system being overwhelmed, given the huge increase in mail-in ballots. But the chance of your vote not being included in the Election Day count appears to be minimal.

That said, I’m not the only who has expressed concerns about the integrity of absentee voting. Last week, the New York Times came out with this article: “As Trump Sows Doubts on Mail, Democrats Push More In-Person Voting.”

In Philadelphia, Democratic Party leaders are encouraging people to vote in person. As in Iowa, Pennsylvania Democrats had been pushing vote-by-mail. But given Trump’s denigration of mail-in ballots and a whole slew of unfavorable court rulings, Party leaders in Philly have switched their approach.

“The only secure thing is to walk to the polls, put your mask on, bring some hand sanitizer — just go vote,” said Bob Brady, a former congressman and the chair of the Philadelphia Democrats. “This president is going to do everything he can to fight any state, or any city that has an overwhelming vote against him — and we will have an overwhelming vote against him. And we’ll be in his cross hairs.”

That scenario may be more of a problem in Philadelphia than in any city in Iowa. Again, I have increased confidence that, in Iowa, if you choose to vote by mail or at your county auditor’s office, your vote will be counted on time. But to be extra safe, I’ll don my mask and vote at the polls.

Here are three things I hope you’ll commit to doing this week:

2. If you live in Iowa, call five other Iowans and tell them why it’s of the utmost importance that they vote.

Kathy and I have a sign in front of our home, compliments of Channing Dutton. It reads, “Vote With Climate In Mind” (see photo above). We like the sign, but decided it could be a bit stronger, perhaps: “Vote Climate. Our survival is on the ballot.”

Not a week goes by without some new climate disaster making it clear we face an existential threat like none other. CO2 levels are at 414 parts per million. The last time Earth’s atmosphere hit that threshold was 3 million years ago!

Climate is indeed on the ballot. Our government can’t continue to enact policies that allow fracking and off-shore drilling while doling out huge subsidies to oil and gas companies. Vote for candidates who pledge to make fighting climate change a top priority!

We also discuss the integrity of Iowa’s voting system with Kimberlee Spillers of Atlantic. Kim’s a business owner, author, coach, teacher, organizer, and speaker who served on the Iowa Dental Board and worked on four congressional races.

We talk with Dr. Charles Goldman about how President Trump’s COVID-19 infection might affect the election. Charles and his brother, Dr. Stephen Goldman, then tag team the question of whether the federal court system needs an overhaul. Stephen is past president of the North Jersey Civil War Round Table and member of the Abraham Lincoln Institute Board of Directors. His book about the impact of combat and military service on veterans’ lives will be out soon.

Stephen notes that, for the past thirty years, there’s been “a dedicated campaign by Republicans to remake the federal courts that the Democrats have utterly ignored in the belief that voters are not sufficiently interested to make it a viable campaign issue.”

Some of the reforms we discuss are (1) expanding the Supreme Court, (2) term limits on all federal judges, (3) rotating judges on and off the Supreme Court so each president gets a specified number of appointments, and (4) associated reforms, including granting statehood to the District of Columbia and Puerto Rico.

Finally, Kathy Byrnes of Birds & Bees Urban Farm looks at the increased attention paid to urban agriculture by the media — in part driven by the pandemic, in part by climate change.

Here’s our line up:

(01:07) Climate Report – Arctic is the warmest it’s been in 3 million years;
(13:46) The integrity of our voting system from a rural perspective, with Kimberlee Spillers;
(27:55) How Trump’s COVID case might affect the election, with Charles Goldman;
(40:37) US courts need a complete overhaul, with Drs. Charles and Stephen Goldman;
(54:37) Urban farming in the news, with Kathy Byrnes, Birds & Bees Urban Farm.