In a world where it seems that most news is bad news, I’m sorry to have to pile on. But it’s better to know the truth than to live in denial — and if the truth doesn’t always set you free, it at least let’s you know what you’re up against and gives you a fighting chance to push back. 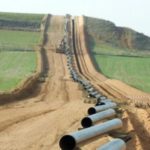 So, here’s the bad news: Energy Transfer Partners (ETP) is planning to lay a second pipeline across Iowa!

Last week, I received an anonymous call from a long-time professional in the oil industry. I’m by nature cautious and not inclined to believe claims that aren’t well founded. So, I spent close to three hours on the phone with the caller. I also did a whole lot of additional research to corroborate what they told me.

Sorry to say, but their claim adds up. Just as ETP was quiet about DAPL #1 in 2014 — not letting the public know until it had bought off Iowa’s political establishment and had its ducks in a row — ETP wants to keep this new pipeline under wraps as long as possible.

We can’t let that happen! If we are to defeat this new pipeline, we have to start organizing NOW. One of Bold Iowa’s next steps is to determine what exactly ETP has to do to site the new pipeline, since it’s not immediately clear what existing easements allow.

Beyond that, there are three things YOU can do to help. Here’s our call to action:

1. Ask state and federal candidates running for office in Iowa if they support or oppose a second Dakota Access pipeline running diagonally across Iowa. We especially need to know where the candidates for governor and US Congress stand, but also candidates for the state legislature. Ask them (documented with a video if possible), let us know what they say, and we’ll spread the word so voters know.

2. Donate to Bold Iowa. We need your financial support to keep this fight going. Please consider a monthly donation as that gives us the solid base we need to focus on our work. We already spend way less time fundraising than most non-profits, and our monthly donors make that possible.

3. Share this press release through your social media connections and with any member of the mainstream media you have a connection with. Here’s a link to the release and the full text:

Des Moines, Iowa —  Bold Iowa’s director, Ed Fallon, revealed today that, over the past week, he has had extensive contact with a highly credible source within the oil industry who informed him that Energy Transfer Partners (ETP) intends to build a second pipeline along the existing easement through North Dakota, South Dakota, Iowa, and Illinois.

“I’m by nature cautious and not inclined to believe claims that aren’t well founded,” said Fallon. “So, I spent close to three hours on the phone with the caller. I then did my own research and their claim adds up. Just as ETP was quiet about the first DAPL in 2014 — not letting the public know until it had bought off Iowa’s political establishment and had its other ducks in a row — ETP wants to keep this new line under wraps as long as possible so farmers, landowners, Indigenous communities, and other opponents have less time to respond and fight back.”

Fallon says his source’s information is supported by recent developments. A Jamestown Sun story two weeks ago indicated that the “Bakken Formation has reserves of 30 billion to 40 billion barrels of recoverable oil, or roughly four to five times more than the government’s latest estimate.”

On top of that, according to a Dallas News story out this week, “Growth in the Permian {Basin in West Texas} has, in fact, been shrinking, down almost every month this year, while declines in older wells are trending higher, according to the U.S. Energy Information Administration.”

“From ETP’s point of view, if you couple the economic realities that favor Bakken oil with the political reality that a change in leadership in Washington, DC is inevitable, it makes sense that ETP would want to move quickly and aggressively to expand its capacity significantly,” Fallon said.

Bold Iowa and Indigenous Iowa have worked as partners in opposition to the Dakota Access pipeline for over two years. “As we push back against the abuse of eminent domain, the acceleration of climate change, and the threat oil pipelines pose to our land and water, it’s essential that the voices of Iowa’s Indigenous leaders are heard and taken seriously,” concluded Fallon.

Indigenous Iowa raises awareness about the devastating effects that oil, gas, and coal have on the environment, particularly on Indigenous lands where government-backed corporate conglomerates practice predatory economics and exploit communities. Indigenous Iowa promotes the development and implementation of renewable energy through the worldview of Indigenous ideologies.