Democratic presidential candidate Marianne Williamson is my guest on this week’s Fallon Forum. You can listen live on Monday from 11:05 a.m. – 12:00 noon on La Reina 96.5 FM and 1260 AM (in central Iowa), on our website, and live-streamed on Facebook. 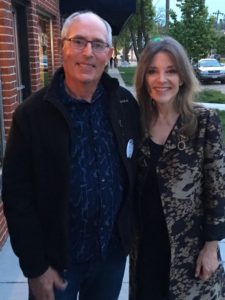 Marianne Williamson with Doug Fuller during a meet-and-greet at Enchanted Mystical Boutique in Des Moines.

Williamson is a different kind of presidential candidate. Yeah, I know, so is Donald Trump. But think of everything you don’t like about Trump (sure, long list) and Williamson is pretty much the opposite.

Here’s what she had to say about the climate crisis at a recent townhall appearance on CNN. We’ll discuss climate during our interview, of course, and a whole lot more.

The pumping station on the route of the Dakota Access Pipeline near Cambridge, Iowa.

On this week’s program, we also discuss developments in the proposal by Energy Transfer Partners (ETP) to double the flow of oil through the Dakota Access Pipeline. ETP wants to “optimize capacity” through changes made to the pumping station near Cambridge, about 20 miles north of Des Moines. The Iowa Sierra Club and Bold Iowa are leading the charge to expose ETP’s plans and push back against them.

We were quite pleased earlier this month with the Iowa Utilities Board’s response to ETP’s brazen insistence that it doesn’t need permission to increase the flow of oil from 570,000 barrels per day to 1.1 million bpd. We need to remain vigilant, active, and vocal if we are to stop this expansion — which amounts to an increase of carbon emissions equivalent to thirty coal-fired power plants, according to Oil Change International! At a time when science has made it emphatically clear that greenhouse gas emissions must come down if we are to maintain any hope for a sustainable future, there is no moral or economic justification for ETP’s proposed expansion.

Thanks for reading. Thanks for listening and/or watching. And thanks for supporting the local businesses that help make this program possible — click on the logos to the left, to learn more. — Ed Fallon