{To read Ed Fallon’s daily blogs from the Walk to Paris, click here.}

On Veterans Day, November 11, 2015, two men who last year walked across America for action on climate change set-out from the coast of Normandy, France, walking nearly 200 miles (320 kilometers) to arrive in Paris on November 28 — just before the start of the United Nations Climate Summit, an event seen as pivotal if the nations of the world are to take effectiv

Last year, Ed Fallon of Iowa and Steve Martin of Kentucky walked over 3,100 miles (5,000 kilometers) across America with the Great March for Climate Action. The March was conceived by Fallon, a former Iowa state lawmaker, as a dramatic way to build public awareness about the urgency of the climate crisis. A core group of 35-50 marchers walked 15-20 miles (24-32 kilometers) six days a week for eight months, engaging thousands of Americans in one-on-one conversations about climate change. Fallon and Martin were two of five marchers who walked every step of the way.

Having reached the east coast of the United States last fall, and with the all-important UN Climate Summit in Paris looming, Fallon and Martin felt called to continue their trek. Beginning their Walk on the coast of Normandy, where Allied troops launched the successful liberation of Europe in 1944, holds great significance for Fallon as he tells the story he shared with people he met during last year’s Climate March.

“My Dad would tell me about World War II and the home-front mobilization,” mused Fallon. “He was a kid at the time, the son of Irish immigrants growing up in the South Bronx. Military advisers warned of mounting atrocities in Europe and the South Pacific, and my Dad could not understand why America wasn’t responding.

merica woke-up and it was all hands on deck,” continued Fallon. “My Dad would go down to the railroad tracks and collect tinfoil from cigarette boxes for the scrap metal drives that were crucial to the war effort. And the nation as a whole got involved, retooling an entire economy in a matter of months to fight and win the defining crisis of the 20th century.”

“Last year, I shared my Dad’s story with hundreds of people as I walked across America, coast-to-coast” concluded Fallon. “It’s time again for America to listen to the experts, in this case the scientists, who warn us of the urgent threat of climate change. It’s time for America to wake-up like we did in response to World War II and help lead a global response to the crisis that threatens our very survival.”

For his part, Martin was deeply moved by Pope Francis’ encyclical on climate change. Martin continues what he calls a pilgrim’s walk, “a walk that began long before my memory can be trusted,” he quips. “No one is the enemy in the struggle for climate action,” he says. “All of us are participants, and we all have the power to reaffirm life, if we choose.”

“Making footsteps is a practice that links our common spirit to the change we hope to see,” says Martin. “In the end, I believe the human heart will triumph.”

With the comparison to America’s mobilization in response to World War II, Martin sees a very important connection to the climate struggle: “Democracy represents the will of the people only when we become collectively engaged in a common cause, just as another generation did at Normandy.” 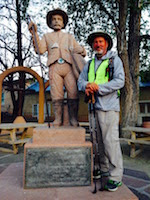 Martin is from western Kentucky, a region possessing the highest CO2 emissions rate per kilowatt hour anywhere in the country. It is an area of the country where coal is king. Yet last year, Martin found himself on a pilgrimage to walk every step across America with the Great March for Climate Action. He began in Los Angeles with the main group of marchers. In eastern Colorado he diverted from the March to connect his footsteps with the People’s Climate March in New York City. At the September 21 event that drew 400,000 people, Martin was the only participant to have walked across the entire country to attend.

Martin hopes these new footsteps to Paris contributed in a small way to a successful UN summit and decisive action to address climate change.

Fallon and Martin walked about 20-25 kilometers (12-16 miles) five to six days a week. In both the U.S. and France, they hope to network with organizations addressing climate change, environmental concerns, churches, other communities of faith, and veterans organizations. In the tradition of pilgrims throughout history, they will travel simply and with faith in the goodness of humanity.

One Reply to “Walk to Paris”